In addition to currently serving as legal advisor on the IAHSS Security Standards Board, Jack authored the IAHSS’ educational material and regularly instructs on civil liability.

Jack occasionally serves as security expert to attorneys in matters involving civil liability. He was the defense security expert in the Massachusetts landmark case Whittaker v. Saraceno, 418 Mass. 196 (1994). Whittaker reversed the prior 25 year trend and placed limits on an organization’s [and other landowners] liability for incidents over which they have limited foreseeability or control.

Mr. Santarlasci began his career with Longwood Security in 1992 as a Special Police Officer after serving in the U.S. Army as an Infantryman, Supply Officer and Military Police Officer obtaining the rank of Staff Sergeant.  In 1994 he left Longwood to pursue a variety of endeavors.

He attended and completed the Massachusetts Reserve Intermittent Police Academy and attained his B.S. in Criminal Justice from the American Military University in 2010, 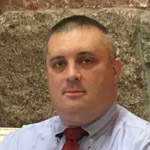 Troy returned to Longwood in 2012 to lead our Community Services Division with a long list of accomplishments, including having served as a Deputy Sheriff in the Bristol County multi-agency Drug and Anti-Gang Unit and, serving for twelve (12) years as Chief of Police/ Director of Public Safety for Mount Ida College, which offers a variety of Bachelor and Masters’ programs to its 1,500 students [900 of whom live on the 72 acre campus] and who matriculate from 25 states and 35 countries.

Troy holds instructor certifications in several subjects from the Massachusetts Police Training Council, American Heart Association, Safariland Training Group, Larry Smith Enterprises and the Massachusetts State Police which he has utilized to strengthen and expand Longwood’s World Class Training, both by teaching core classes as well as mentoring other company instructors. In 2011 Troy was formally recognized by the Commonwealth Of Massachusetts House Of Representatives for training he conducted for Reserve and Auxiliary Officers throughout the State.

Additionally, Troy has volunteered as a youth minister and peer counselor specializing in program development and outreach. As part of his volunteerism, Mr. Santarlasci served as Director of Security for the Boston Archdiocese’s Pilgrimage 2000, requiring an exhaustive commitment in planning and managing events at Gillette Stadium, the Boston Common, Fenway Park, and the Vatican. This commitment involved coordinating the Archdiocese’s security team with the Boston and Massachusetts State Police, the Vatican and Rome Police, and various other U.S. and Italian government agencies.

"Longwood is marked by a professional attitude and cooperation. They're an example of a security operation that works well with other agencies and are the first agency that we have done public/private cooperative training."